For some reason I have been putting off writing this race report. It has been 10 days since the race and I still can't find any motivation to run (or even think much about it). I figure that I should get some words down before I forget the highlights. Having said that, here goes...

I had been thinking about running a 50 mile or 100k for a few months before signing up. I'd completed four 50k races and felt that I'd figured out how to survive that distance. I wanted a new challenge but didn't want my first time at this distance to be in the Phoenix area. After finishing a run with Trevor in April he mentioned that he had signed up for the Cuyamaca 100k as his qualifier for Western States 100. There were less than 30 spots left and I jumped on one, obviously.

Leading up to the race I trained more than any previous event. I'm not sure what I was thinking but I created a 25 week plan that encompassed 1,347 miles of running. I didn't live my life by the plan but I did try to stick to it whenever possible. Having said that, I completed 1,280 of the planned miles by the end of the race. Most of these miles were at temperatures that started out in the 80's and finished in the 100's. Training though a Phoenix summer is not something I'd wish on anyone. It is extremely difficult to manage fluids on long runs when you drink 70 ounces every two hours. I couldn't wait for the training to be over. The thought that stuck in my mind those last weeks was that I was ready to celebrate my hard work by completing my first 100k.

On to the race!

The Cuyamaca 100k is located mostly in Cuyamaca Rancho State Park about 40 miles east of San Diego. There are three unique loops covering ~63 miles and ~8500 feet of elevation gain. Leading up to the race Trevor and I expected the temps to be in the high 80's to low 90's as that was what we'd seen the last couple of years. Low and behold, the forecast kept dropping every day with expected temperatures ranging from 45-67. How lucky is that!

Packet pickup was only available race morning so there was no hurry to get to the race site. My family and I headed to Julian, CA to the wonderful house we rented. The location was about 25 minutes from the start line. That night we had Trevor, Greg, and Lisa over for pasta and bread. They left early and I was able to sleep about 7 hours.

Race morning. Packet pickup was quick and orderly. I received both a shirt and sweatshirt of my color choice. Pretty sweet. I handed off the goodies to my wife and lined up with Trevor. I opted to wear my vest with a 55 ounce bladder and carry a handheld bottle for the entire race. This allowed me to keep water on my back and Tailwind in the bottle. I didn't always top off the bladder but I was so used to wearing it during training I figured it wouldn't be an issue. 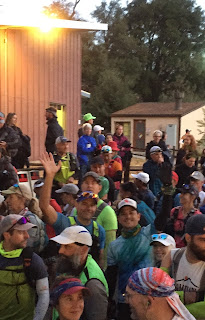 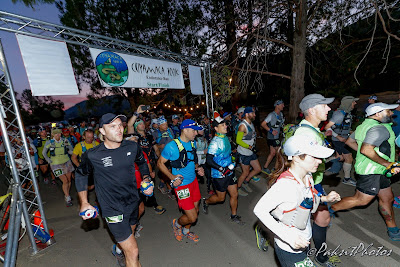 At 6:30 we were off. I had read that the trail turns to single track almost immediately but I failed to position myself accordingly. The first quarter mile ended up being a walk but after that Trevor and I found a good pace and mostly stuck together through the first and second aid stations. The first aid station had a net elevation loss of 700 feet over 8.4 miles while the second aid station gained 1200 feet in 5.8 miles. There were some decent climbs in that section that required some walking, but nothing too challenging. 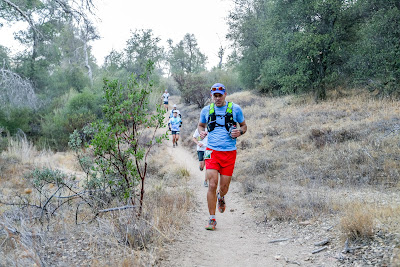 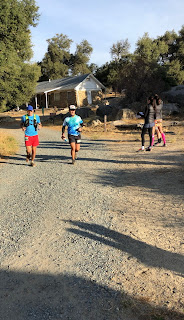 I would end up losing Trevor in the climb to Cuyamaca Peak. This section boasted ~3000 feet of climbing over 9 miles. After a bit I joined a few other runners who would run/walk to the highest point of the race. I had expected to walk much of this distance but found out that a lot of it was runable; however, the last quarter mile was so steep that hiking was the only option. The aid station at the top was full of energy and lifted the spirits. I grabbed some bacon, a popsicle, potatoes, and I was off. On the way down I gave Trevor a cheer as he was heading up. 23.2 miles completed.

The 4th aid station, Paso Picacho, was 5 miles away and almost 2000 feet down. This part of the course was technical and I didn't gain a lot of time on the decent for the first couple of miles. After clearing all the rocks there were a couple of bridges and plenty of beautiful scenery. I remember asking a fellow runner if there was a fire nearby as I could see what looked like smoke hanging around the mountain. He informed me that it was just clouds (not something I see in Phoenix much).
This aid station was memorable for the pickle sandwiches filled with bacon, cheese, and ham. So good. 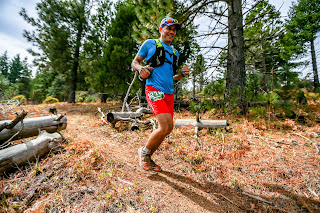 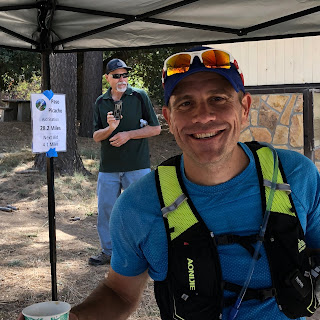 The end of the first loop came after another 3.6 miles. The time seemed to drag a bit as I was excited to knock out the first 50k and come back to my gear. There was also a chance I'd see my family here but we missed each other by 10 minutes. Oh well. More food, drinks, a bathroom break, and I was off into new territory. I knew that in only a few miles I'd exceed my longest run to date.

East Mesa TH aid station was 8 miles out and the section started with a solid climb that sucked up a bit of my confidence. I was starting to drag around mile 34 until I worked to catch up with a group of three runners led by a chatty woman. Immediately after catching them I get a stitch in my right side that I had to breathe through for a couple miles and would plague me for another 20. It was worth it though as I felt that just being around people talking was enough to erase my doubts. I ended up running almost all the remaining miles with that lead woman, Nadia. She set a good pace when I couldn't and vice versa. This section of trail went through grassy plains after that first climb with a nice steady decline. I don't remember too much about this aid station other than I grabbed another popsicle and forgot to grab anything else to eat as it seemed really crowded at that moment. 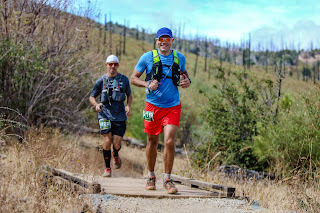 After another 4.8 miles I was back to the start and the completion of loop 2. My family was there along with Trevor's crew and pacer, Greg. My kids told me I smell horrible while my wife Kristen and Greg helped with food, drink, and a change of shirt. I grabbed my hat, arm sleeves and headlamp and headed back out for the final 18 mile loop.

It took me about a mile to catch up with Nadia as she left the aid station before me. The 6.8 miles to Sunrise aid station had ~1000 feet of gradual climbing. My memory seems to have quit at this point as I don't recall much about this section except the aid station itself. I noticed that as we were coming up there was an American flag and another flag below but by the time we hit the AS I forgot all about it. It wan't until we left that Nadia asked my if I had noticed what was going on there. She pointed out that there was a Trump MAGA flag flying and Fox news on the TV. I am so oblivious!

When we left the AS my legs were feeling really good, all things considered. I was on the ridge-line and the view was great. I picked up the pace and couldn't believe that I was still able to move like this. That all came to a screeching halt after a few miles when the winds started blowing hard enough to push me into the sides of the rutted trail. Of course, I was running against the wind as well. I had to walk off and on until I hit the final aid station so I didn't fall over. It was so cold and windy that I took a break and had some soup to cover me for the final 6.8 miles. It tasted delicious.

There was a short climb of a mile or so as the sun dipped below the horizon and the headlamp came on. The last 5ish miles were run in the dark. I passed a couple more runners and got into the aid station in 13:19.28. I had moved from 103rd place at mile 14.2 to 50th place. 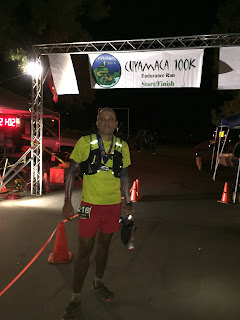 My thanks go out to the race director, crew, and volunteers at the race. It was a great event. The energy was high, the food great, and I never felt lost out on the course. I couldn't have asked for a better 100k.

More thanks to all my running partners: Trevor, Tom, Richard, Jesse, and many, many more.

Special thanks to my wife who supported my crazy runs in the morning, weekends, and out of town and to my children who missed me most mornings.